This Past Paper examination was examined by the Kenya National Examination Council (KNEC) and it applies to the following courses:

Note: To easily navigate through the KNEC Past Examination Paper Pdf below, Mobile phone users are advised to use Mozilla or Chrome browsers

2. a) i) Outline four reasons why OOP is popular in software development. (4 marks)
ii) Describe dynamic binding as used in OOP. (2 marks)
b) Distinguish between state and behaviour of an object as used in OOP. (4 marks)
c) Study the following C++ program segment and answer the questions that follow.

3. a) Evaluate each of the following C++ statements (show your working).
i) b -12 + 4- 7 * 9 % 6 + 12/3 (2 marks)
ii) 13 – (8%5)>-9%7-3+6 *2 (2 marks)
b) i) Write a C++ program that accepts the radius of a circle and uses an inline function to determine the area of circle. The program should output the area of the circle. (4 marks)
ii) Describe the circumstance under which the following varieties of classes are used in OOP:
i) data managers; (2 marks)
ii) data source/sink. (2 marks)
(c) Write a C++ program that accepts the dimensions of a rectangle and a rhombus. The program should then use an overloaded function named area to determine area of the respective figures. Output the dimensions and areas of the figures. (8 marks)

4. a) (i) Explain the term recursive function as used in programming. (2 marks)
(ii) Distinguish between value and variable parameters as used with functions during C++ program writing. (4 marks)
(b) (i) List four rules that are applicable when using constructors in C++ programs. (4 marks)
(ii) Write a C program that will implement a class named arithmetic with three integers initialized to 5, 7 and 10 respectively and a member function used to determine and output the product of the integers. Use a parameterized constructor. (5 marks)
(c) Interpret the following C++ program segment. (5 marks) 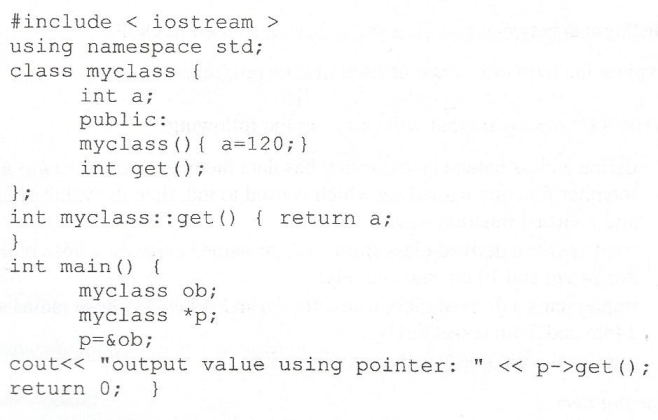 5. a) (i) State two ways of using references in C++ programs. (2 marks)
(ii) Distinguish between friend function and function prototypes as used in C++ programs. (4 marks)
b) Explain three benefits of inheritance as applied in OOP. (6 marks)
(i) Helen would like to implement operator overloading in her system project. Outline two restrictions associated with operator overloading that she should consider. (2 marks)
(ii) Write a C++ program that will implement a class named matrix with following properties: (6 marks)
• data members as x and y;
• a constructor for initializing the matrix elements (x — 3 and y — 4);
• a member function for displaying the matrix elements;
• an overloaded operator function for determining the product of the matrix with a scalar that is input in the main program.
Note: The program should display the matrix elements of the product.

6. (a) (i) Explain the following forms of inheritance as used in OOP:
I. Extension;
II. Limitation.
(ii) Describe the circumstance under which each of the following concepts are most applicable in OOP:
i. Abstract class; (2 marks)
ii. Virtual function. (2 marks)
(b) Copy constructors are only used for initialization in OOP. Describe three occurrences of initialization where they are applicable. (6 marks)
(c) Write a C++ program that will write characters to a file until the user enters ‘$’ to stop. (6 marks)

8. (a)Explain two reasons for using l/O files in OOP. (4 marks)
(b) Distinguish between overloading unary operators using member functions and using friend functions. (4 marks)
(c) The module III candidates have been advised to use OOP in their projects. Explain two measures that they should put in place in order to cope with the challenges in OOP.
(4 marks)
(d) Write a C++ program that uses an array of objects to generate the following output. Use for loop. (8 marks)
1      2
3     4
5     6
7     8