The paradox of thrift relates to the possibility of households intending to save more (or less) but actually ending up saving less (or more). Suppose people decide to become more thrifty; that is, they decide to save more at each level of income. One might expect that this would increase the total amount of savings, but the simple Keynesian multiplier model predicts a paradox of thrift, that total savings will remain the same and income will decline. It is an economic concept that holds that if everyone tries to save an increasingly larger portion of his or her income, they will become poorer instead of richer. This is because the economy will slow down from reduction in demand and the very same people would lose their jobs. This theory, however, applies mainly to Keynesian economics where increased savings represent a diminishing circular flow of income.
In the figure below it is assumed that the level of investment is positively related to the level of income (as indicated by the upward slope). The initial equilibrium is at point ‘a’ with income level ‘y0’ and ‘s0’ being saved. Let’s assume that Households decide to save more (for whatever reason) and therefore spend less of their incomes. This is indicated in an upward shift in the savings function from s1 to s2. Because of the increase in savings represents a fall in aggregate demand, the equilibrium level of income falls from y0 to y1
(point c represents the new equilibrium). Although the savings ratio has increased, the overall level of savings has fallen due to the fall in the level of income.
Households had intended saving an amount s1 from y0 but ended up saving an amount s2 from y1 i.e. the level of savings has fallen despite the original intention to increase spending. 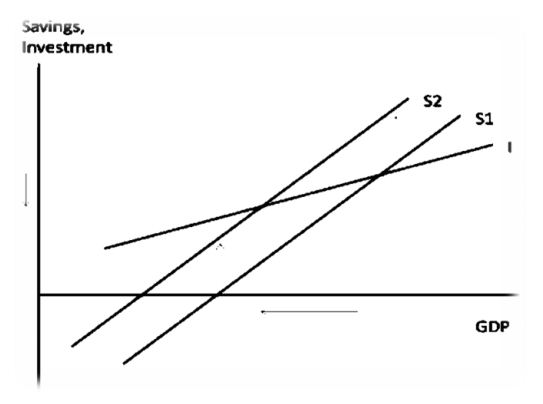