1. Study the map of Africa below and answer question (a). 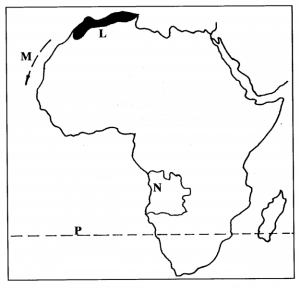 6. (a) (i) Identify three early political associations in Kenya. (3 marks)
(ii) Describe the role of early political associations in the struggle for independence in Kenya.      (8 marks)
(b) Give three methods used by African nationalists in the struggle for independence. (3 marks)
c) Explain three ways in which the second world war influenced the growth of African Nationalism. (6 marks)